If you believe you need the perfect career to be a thought leader, think again. Thought leadership transcends career.

Perfection as a prerequisite for success is a myth, keeping many people from writing their book, starting their blog, or any other thought leadership content inside them.

Perfectionism is a self-limiting belief that sounds a lot like this:

“I’m not the top of my field like [INSERT NAME OF YOUR FAVORITE GURU]. Who am I to think I could be a thought leader?”

“My career is like a patchwork quilt. Who’d want to hear from someone who can’t get their act together?”

The myth that your career has to be “perfect” to qualify to write a thought leadership piece like a book or blog is much like the myth that holds back entrepreneurs and creators from creating and shipping their product.

“If you need to be perfect, it’s hard to press the ‘ship it’ button.” – Seth Godin

When it comes to thought leadership content, the product in large part is made up of you. You are the sage, the motivator, the sherpa.

As a result, we tend to obsess over our faults and unfulfilled expectations rather than focusing on the content and making it as helpful and exciting as possible.

Our inner slavedriver cracks the whip, demanding you do one more project, achieve one more goal, attain one more position—then you’ll have credibility! Before then, you should forget about it. You’re a nobody before you get that “one more” thing done.

You’ll never finish that “one more” thing. There will always be something else to take its place.

Besides the futility of it all, it’s just not true that your audience is waiting for your career to pan out just right before they’ll listen to you. Many people with the most uncertain, crazy career paths are now leading thousands in the causes they care about deeply.

People are willing to follow you, even if you have career foibles.

Former NFL quarterback Tim Tebow not only has sports talent. He also has a captivating story.

One of five children to Baptist missionaries to the Philippines, Tim almost didn’t happen.

While recovering from a severe illness that nearly took her life, Pamela Tebow found out she was pregnant.

The strong medications she had taken to save her life unknowingly caused the placenta to separate prematurely from the uterus, robbing the unborn child of vital nutrients, oxygen, and antibodies from Pamela’s body.

Doctors recommended abortion, as the baby was sure to be stillborn. Bravely, she refused.

Shortly afterward, Tim Tebow was born with no complications in Manila, Philippines.

While in high school, Tim’s indomitable will again came to the surface. In one decisive game, he led his team to victory in the second half with a broken fibula while at one point rushing for a 29-yard touchdown.

Tebow went on to play for the University of Florida, continuing to smash records. He won the Heisman Trophy in 2007.

Later, he was selected by the Denver Broncos, where he led the team to several nail-biting comebacks in his rookie year. He became the Bronco’s starting quarterback in 2011, but his performance started to get spotty.

And so did his career.

He was traded to the New York Jets in 2012, and then to the New England Patriots in June 2013. But then he was abruptly cut from the team that same year in August.

Not to be deterred, Tebow started a broadcasting career on the SEC Network before jumping back into the game with the Philadelphia Eagles in April 2015. Unfortunately, he was released on September 5 of that same year.

He rode a swiftly rising trajectory in football, but then started to falter. Went into broadcasting, then came back. When that didn’t pan out, he switched to a whole other professional sport.

You would think most athletes with this kind of twisted career path wouldn’t have many people interested in following them.

Everyone wants to hear from the one who went the whole way and dominated their industry, right? 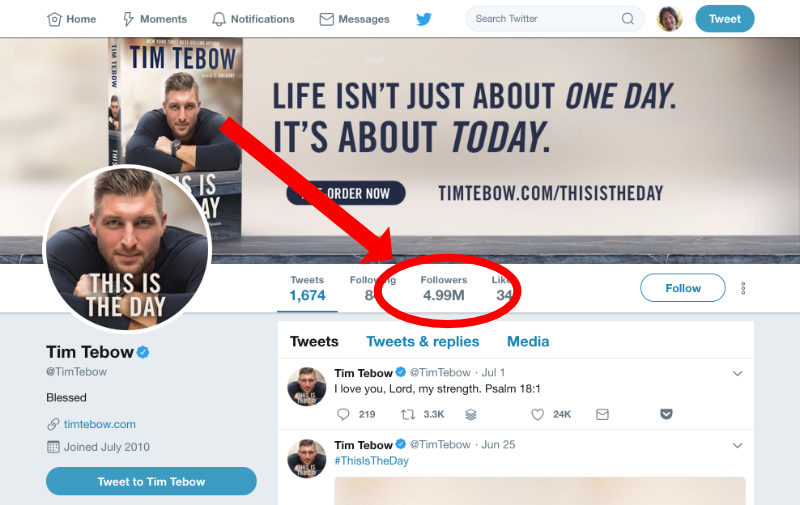 The 30-year-old has authored six books, speaks publicly from time to time, and runs a growing nonprofit organization.

How did a young man who could have ended up as a total washout like so many other flash-in-the-pan athletes end up as a thought leader with so much influence?

Why? Because thought leadership is not about being perfect.

It’s about the lessons we learn along the way in our journeys and how well we are able to communicate those lessons to those who would follow. 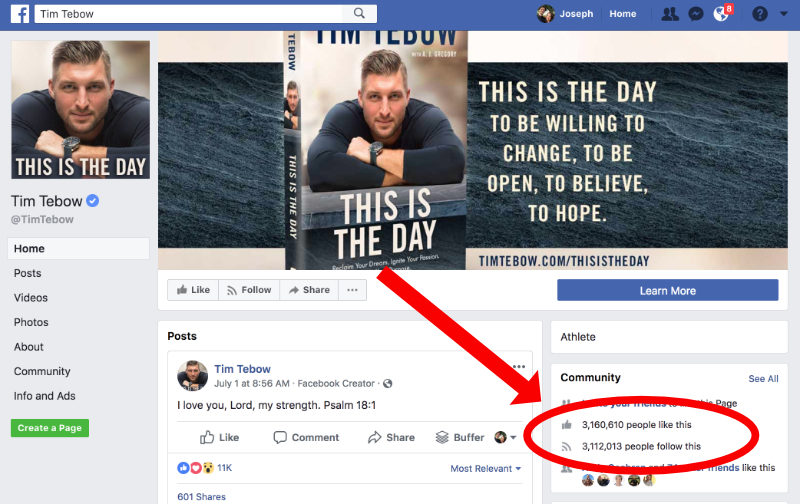 At his core, Tim Tebow isn’t about football.

The slogan for his charitable foundation sums up the thread that runs through Tebow’s life:

“To bring faith, hope and love to those needing a brighter day in their darkest hour of need.”

It’s hard to see the stitches in a well-crafted quilt. Arguably, the threads that hold the whole thing together are the most critical part, but they get the least attention.

The patches are the show stealer.

So how do you look past all the patches in your career — all those bullet points on your resume — to find the seams that connect them all?

Look deep to find the inner convictions that drove you to action in all of those moments. 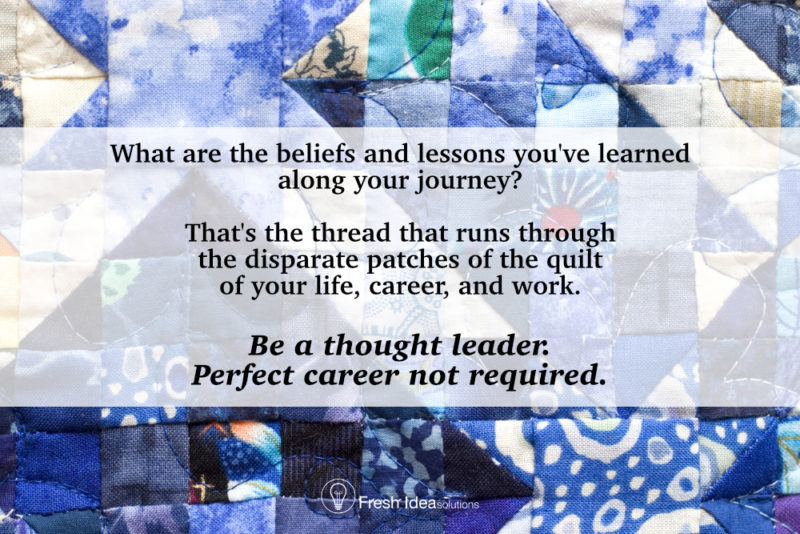 I’m sure you’ve got hundreds of strategies, tools, and methods your followers need to know about — but what are the core beliefs that get you excited about your area of expertise?

What’s the thread that runs through the disparate patches of the quilt of your life, your career, your work?

What’s the underlying passion that you’ve pursued, no matter what place you were at in your career?

What are the lessons you’ve learned along the way that would help another person take a smoother road — or have the courage to take the harder road less traveled?

The answer to these questions is the foundation for your thought leadership content or content marketing pieces.

If you know what you believe, career turbulence won’t be able to rob you of your place as a thought leader.

Are you letting the fact that you have a patchwork career hold you back from writing your thought leadership book, eBook, or blog?

Find the inner convictions, the “stitches,” that hold it all together and lead your tribe.

View all of Joseph's posts.

This site uses Akismet to reduce spam. Learn how your comment data is processed.