What happens when the trailblazers who shaped our nonprofit and education institutions fade into the sunset? Your content marketing strategy needs to carry the day with thought leadership content that bridge the gap between past and present.

Years ago, I was a fundraiser (and later alumni director) for an international organization with roots that began in the 1940’s and an official launch date in 1948.

The man and wife team that began the institute were a tour de force who moved mountains through sheer faith, perseverance, and clarity of vision. Tragedy struck in 1973 when the husband died suddenly.

Despite her grief, this one-woman army led the organization until about 2005 when she finally retired at the age of 90.

Her death five years later in 2010 was a tectonic shift, a massive change so deep under the surface no one could have entirely predicted the effects of her passing.

Cracks began to appear in the organization’s operations, programs, marketing, and fundraising.

Shaken, we frantically clawed for agreement on the vision of who we were without her.

The beautiful organization I was a part of struggled to recover its former level of influence and trust among constituents.

And this legacy organization isn’t the only one striving to maintain relevance with a new generation of leaders who’ve inherited stewardship of the vision.

Leaders from the Greatest Generation and Baby Boomer generation are passing on a formidable legacy to all of us.

The legacy they’re entrusting to us is much more than the $41 trillion that’s expected to transfer in inheritances over the next 25 years. They’re leaving us hopes, dreams, and systems they culled out of the rocky terrain of the 20th century.

Because many of us weren’t there when the mission of our nonprofit and educational organizations began, it’s hard to grasp the context of the dream.

What were the historical forces, moods, and philosophies that gave wind to our sails and inspired donors to give?

Look, I understand this isn’t a problem for all nonprofits. Some human services organizations have causes that need little explanation.

But many, many causes are in danger of obsolescence if current leaders cannot find a way to bridge the past with the present. Click To Tweet

So how do you build that bridge where your modern audience understands and cares about a vision forged in the fires of yesteryear’s turmoil?

Too often, thought leadership content is relegated to innovative ideas. The new. The now. The future.

Of course, there’s nothing wrong with being the cutting edge leader in your field, cause, or programs!

But when we talk about thought leadership, we’re tempted to think of leading as in taking the lead in a race.

Counter-intuitively, thought leadership isn’t always about showing what’s ahead in the future. You can lead your audience by going back, too.

Thought leadership content is about leading your audience through a compelling thought process  — one that connects the concrete past to the possibilities of the future.

For those leading legacy organizations, this means taking your audience back to your founding or other past accomplishments to inspire them to join you today.

Time does not determine relevance! Things that happened years ago can be highly relevant today.

Which is why The Wizard of Oz, a film produced in 1939, continues to stir imaginations. Or why great works of the past such as Anna Karenina, The Grapes of Wrath, or Don Quixote, still ring true for us today.

In those long-form content pieces, we are inspired to present-day action through a story in the milieu of the past.

These classics could be considered a type of thought leadership content because they lead us to better thought and action, in spite of their age.

Therefore, if you are running a legacy organization whose mission is not easily understood in the 21st century, consider thought leadership content like writing a book, writing long-form blog posts often, or creating documentary-style video content to lead your audience back to the past to show them the future.

But even if you’re a relatively new organization, thought leadership content pieces are a highly useful tool for raising awareness. Like Charity: water’s president Scott Harrison’s book, Thirst, that’s coming out in October 2018.

What We Need from Leaders

Nonprofit and higher education presidents of legacy organizations are extremely busy with a plethora of responsibilities.

On the inside, everyone is demanding answers, decisions, and one-on-one time from them. But that’s not what the outside world always asks of them. 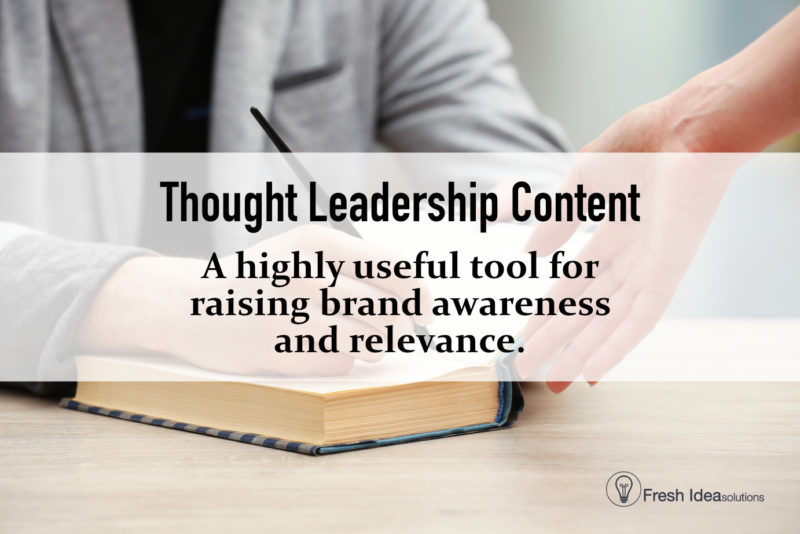 People on the outside of generations-old institutions — donors, alumni, and the general public — are looking to leadership to show how the current activity and purpose of the legacy organization are still relevant today.

They need thought leadership content pieces that will build a bridge from the past to the present.

How are you leading?

If you are leading a legacy organization, you should sincerely consider producing thought leadership content for their content marketing strategy.

It's now up to you to make the case: Why are your organization's vision, ideas, and philosophies still relevant? Click To Tweet

It’s time to stop flirting with the idea of writing that thought leadership book and begin.

If you’re currently writing your book or want to write one, let me know what big ideas you’re wrestling with in the comments below!

View all of Joseph's posts.

This site uses Akismet to reduce spam. Learn how your comment data is processed.